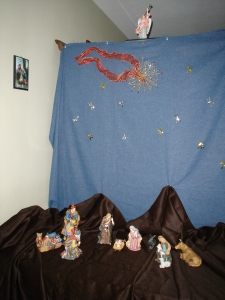 no palace for the King of kings

Have any of you been looking for housing lately? We expect to move into our own place at the beginning of the year, but where? And how much will it be? It looks as if everything is way more than we can afford!

Now, I’m not very fussy. If it keeps out the snow and rain, can be heated with a woodfire (safely) and has some form of sanitation and a water source, we’re pretty much okay with that. We would prefer, obviously, a garden, some sheds or barn for animals, a quiet, natural setting. But we have been happy in a nineteen foot travel trailer and a 300 square foot cabin. We don’t need much.

Housing is expensive because it is a valuable commodity. It should be a basic human right – shelter. We live in manufactured mansions while many in the rest of the world live in what barely counts as shelter – it doesn’t keep out the rain, or animals, or thieves. (Yes, thieves steal from the poor all the time – a few dollars, medications, a wedding ring, even food.)

But for the poor, housing and basic shelter are a constant struggle. Nothing will bring me to tears and all-out panic faster than the prospect of being homeless. I find looking for affordable housing to be exhausting, discouraging and frustrating.  We hear things like, “We will need a deposit,” although every place we lived together has been in better condition when we left than when we moved in; “no pets,” although my old sheepdog has neve done damage, barely makes a noise, and I always clean up after herin the yard, and heaven knows, it would break our hearts (hers and mine) to be separated now;  “you’ll have to take it month-to-month, I may want it back for my daughter in three months” or “you’ll have to sign a lease because people move out of here after just a couple of months and I’ll want the whole year’s rent,” which means there is something terribly, terribly wrong.

If I could buy a house it would be cheaper by the month, but even if we can scrape together a down payment, I don’t have a job and we won’t qualify for a mortgage. There are cheap properties in rural areas, perfect for homesteaders like us, but after a year and more of financial disaster due to Nicholas’s stroke, we have no credit.  We don’t have parents to co-sign. My father is the only surviving parent, he is in his eighties, and he is in another country.

One author we like, Ferenc Mate, in his book A Reasonable Life, pointed out that it used to be that when a couple got married, they went out to the edge of the village, everyone helped build a house, and the young people moved in. Land and property weren’t commodities – they were community property. Oh, in the days of feudalism, one had to ask the lord if it was okay to put up your hut or cottage, but likely he’d say yes, because a newly married couple meant soon-to-be-born babies who would grow up to be productive labourers.

Just about everything we see on real estate and housing, home decoration and family life, is geared toward selling us the American dream – the big house, the rooms full of furniture, kitchen heavy with granite countertops and stainless  steel appliances and expensive cookware. But people don’t seem to live in these houses; they merely exist, moving between bed, car and soul-grinding job. They long for escape. So then we see the advert with the father finding the family members scattered in different rooms, all of them connected to a different electronic device. He takes them on a vacation in a motorhome to make them reconnect around the campfire, under the stars.

That house, in this market, must have cost a half-million dollars; everyone is in their own room. They are not talking to each other because they are comfortable in upholstered furniture, passively receiving communication through television and the internet. Is there some reason they can’t build a fire in that fieldstone fireplace in the barn-sized living room, turn off the devices and talk to each other in their own home? A half-million dollar home, filled with tens of thousands of dollars worth of furnishings, and they have to buy an $80,000 furnished, self-propelled dumpster to have a conversation?

All right, I’m serious about this. We are looking for, first of all, community. We want to live among other Christians, we want some self-supporting work, we want to grow our own food. I don’t know yet how much we can pay in rent, or if we could possibly buy something with a low down payment and low monthly payments. We are clean, tidy and skilled. We are quiet. We aren’t perfect. We have the occasional light drink but you would never know it. We are good neighbours. I am used to being called out of bed in the middle of the night because someone is in need of help.

Is it possible? Does the medieval sense of community still exist? Is it possible to recapture the sense of the early church in being Christians together?

We are poor financially, but we are rich in knowledge. Who needs that in their community? Who has room?