As we discussed Plain dress recently, I think a number of us offered all the usual reasons for it – conformity to Biblical precepts, practicality, denial of self. These are all good personal reasons for Plain dress; I say it is my Christian witness. When people look at me, they know they have seen a Christian. But couldn’t I do that with a cross necklace, a modest skirt and blouse, a kerchief instead of a prayer cap? I could wear a t-shirt even, with Bible verses and great fish graphics. Christian. I could wear my clerics – Christian.

But as I thought about it I was inspired: my Plain witness is a Witness to Peace. I am a Peacemaker.

The Quakers are, throughout their whole Plain history, notable Peacemakers. The Anabaptists who followed Menno Simons were pacifists. that white prayer kapp, apron and long blue dress say “Peace be with thee.” 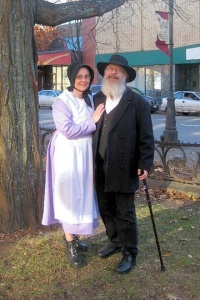 My husband’s beard and long hair, as well as his Plain coat and hat, are symbols of Peace. The early priests in the apostolic church grew out their beards and hair as a way to disassociate themselves from the Roman Empire, whose male citizens were shaven and shorn, a symbol that they were eligible to join the army.

Most people know about the Amish mostly from popular fiction like the movie “Witness.” The witness is a young Amish boy, but the “Witness” is the Amish witness to Peace throughout the movie, over against the kill-or-be-killed ethic of the corrupt police force that the protagonist works within.

The white kapp and the black bonnet, the beard and the broad-brimmed hat, are symbols that we, Nicholas and I, are dedicated to that same Witness. We live that non-violence, and we let people know that. We are witnesses – and hostages – to Peace.

13 thoughts on “Witness: To Peace”