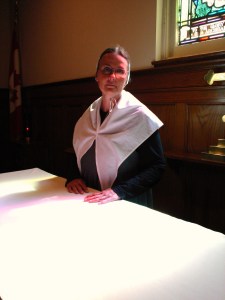 Friends and I recently commented on the question, “Why the Plain witness?” Most of us can say not much more than it is our vocation, an individual call and answer. When the Lord calls, the only answer is “He nai ne,” – “Here am I,” in Hebrew. It is not an answer of confidence, an answer of “Send me, because I am ready to go,” but an answer given trembling in the dark, “Yes, Lord.” What else can one answer?

And that may be the Plain witness, to have our lamps lit. We cannot be hidden under a bushel, the world’s measure. We cannot be a city deep in a valley, no beacon or hope to the lost and terrified traveler. We are to be a city on a hill. We are the visible witness – not only to our own faith, but to the life of the world to come.

That is the prophetic witness. We have been called out of the world because the world is not His. The world has gone its own way. What is that world? It is the world of buying and selling, the world of entertainment and idle talk. It is the world of being concerning with one’s own pleasure. It is a world where people are used rather than honoured, where each is after his own and never mind what anyone else needs. That’s the world in which we have to live, but we don’t have to bow down to it. We don’t have to surrender and be assimilated.

That is the prophetic witness of Plain.

There are false prophets – I can think of cults that use modest and plain-type dress to control their followers, but these are not people following Christ; they profess their own way and make themselves gods. They have usurped the style of Christians in order to hide themselves – wolves in sheep’s clothing. But by their works you will know them – secrecy, criminality, exploitation. We are warned that there will be many false prophets and christs as the world careers into self-destruction.

Those who practice modesty of heart are dedicatd to the scripture and to service to the least of God’s children, who are humble and meek and gentle in spirit – these are the true children of God and who walk in the Light. Their prophetic witness is growing.

“Let your light shine before men.”

27 thoughts on “Plain as Prophecy”